These days, expectations have risen with nursery cafés, many already know of Australian expat, Skye Gyngell who brought to Michelin star fame England’s Petersham Nurseries. In Brisbane we have our own version with well-known chef Gillian Hurst in charge of a café in East Brisbane and I hoped we would be in for a treat. 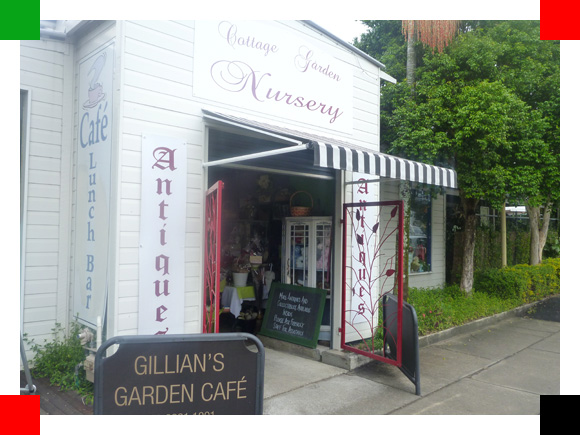 We had tried to get a spot at the café on a public holiday a couple of months earlier, but it was closed just like the other five places we tried that day. I had heard a lot about Gillian’s signature sand crab lasagna, which was the main reason we were so intrigued to try the café out.

We walked straight through the nursery to the cashier’s till where I noticed the Gram magazine which was the issue I was featured in.  The Princess (my sister), Dad and I took a right turn onto a raised wooden floorboard over-looking the pavement below which was also used for seating. It amazed me how big the café area is compared to the nursery.

The menus were presented to us. The Princess was happy to have hot chips while the big decision rested in Dad’s hands. To order two sand crab lasagnas or order one and try a different dish? As much as we wanted our own lasagnas we agreed on eating half of each other’s meals. The Princess went in search of giftware, some looking like antiques so she could try and bargain with Dad about getting something.

She came back just in time for the meals to arrive. 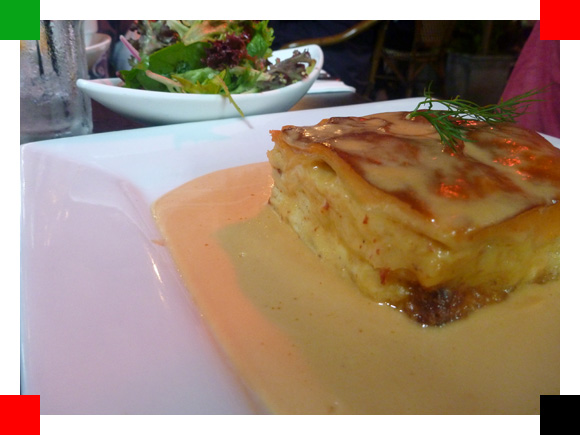 Even with very high expectations the lasagna didn’t disappoint. The creamy crab sauce sandwiched by delicate pasta sheets, covered in a beautiful rich sauce of abalone brought out the memory of the sea within us all. Magical stuff!!

Our main of Crab and Prawn Tortellini with Saffron Broth 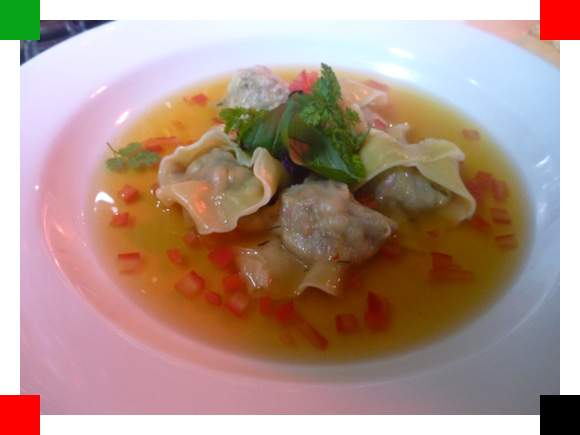 The subtle flavours of the saffron balanced out nicely with the perfectly cooked pasta and chunky filling, adding texture.

The princess went back to find antiques and came back telling us about different vases and boxes she would love to have. She was unsuccessful on this occasion.

I was eyeing off the range of cakes on display and also the desserts specials on the boards. I was in two minds, ordering the Bread and Butter Pudding or the Panna Cotta. It turned out that the pudding wasn’t meant to be on the menu so I opted for the Vanilla Bean Panna Cotta with Summer Fruits. 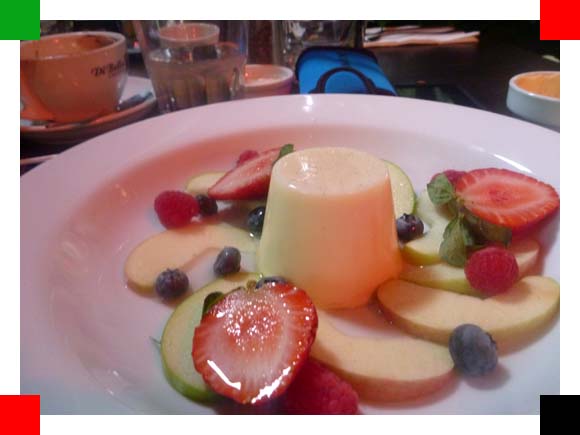 Okay, so it wasn’t the best choice of dessert for an overcast cold day but it was an amazing dessert anyway. It was perfectly set (which isn’t easily come by at other restaurants) and had a creamy, milky taste and was very, very smooth. The fruits stood out magnificently as they had a dressing, which tasted like orange blossom water. I wiped the plate clean with the last apple slice.

Unlike some other Nursery Cafés (i.e Bunnings) I have tried in my lifetime none have been as great as this one. While Gillian is at its head, it’s Magical Stuff!!