The thought of ringing up Urbane to organize for myself to go to their first chocolate appreciation daunted me. I was a bit nervous since Mum and Dad unfortunately could not go. I was dropped of at 6:30 pm and I was led to Sub-Urbane, which is located underneath Urbane. The restaurant is flanked by 100-year-old stonewalls with rough sawn hardwood panels and polished concrete floors. To one end, the humidified wine cellar is visible, allowing for customer selection. To my surprise I was the first one there and got the best of the crop seat, right next to the demonstration table and a great view for the fully wired television.

In front of me sat six chocolates, each labeled from the ingredient mixed with cocoa to make chocolate (cocoa butter) to 100% cocoa. Once everyone arrived the executive chef Kym Machin arrived and greeted us. Kym talked to us about the history behind chocolate and all the components used to make chocolate. Kym then left to prepare the entrée. Aaron Surman the pastry chef arrived and let us eat our chocolates one at a time each time Aaron telling us about the cocoa mass. I found it interesting tasting cocoa butter (aka theobroma oil), which has a mild chocolate flavor and aroma. It was far from my favourite which was aerated White chocolate. It had a crunch and once bitten crumbles in your mouth leaving a distinct white chocolate taste. The weirdest chocolate I tried was the 100% cocoa. It was so strong that once I ate a bud of it I washed down a few gulps of water. 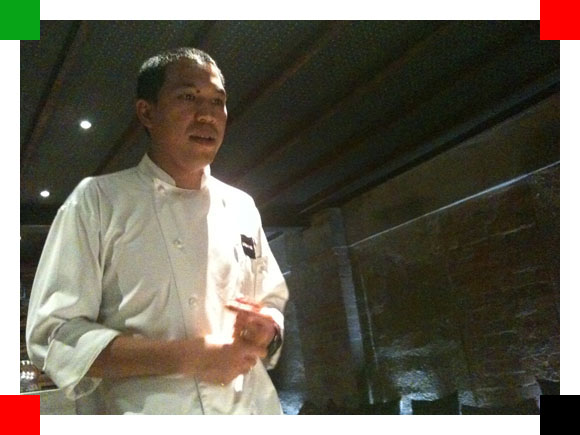 The twenty of us then watched a documentary on a well-known Mexican chocolate company. It taught us the making of a good quality chocolate (not Cadbury) and the machinery used for the making.

Afterwards Aaron demonstrated how to temper chocolate with a machine called the thermo mix (my family has got one). Here’s a link to the thermomix website http://www.thermomix.com.au/. As well Aaron shared one of the restaurants signature recipes for Chocolate Soufflé.

Afterwards the entrées were served, a Roasted squab breast with pomegranate jelly with coffee and chocolate in various textures. I had never tried squab (pigeon) before but was pleasantly surprised by the similarity to chicken. I was extremely impressed with the sugared egg filled with foie gras sauce, Marvelous. The coffee and chocolate added a rich flavour that complemented the squab perfectly. The micro herbs were grown on the roof of Urbane, which receives sunlight and rain. The carrot had been cooked to a crunch but not as if it was burnt, a molecular technique.

After entrée the twenty of us had a break and I was included in discussions around me, which was very nice for them to do so.

Next up on the menu was young venison, smoked beetroot puree and chard with pickled chanterelles, apples and turnips. The venison had purposely been cooked a bit rare to supplement with the rest of the meal. The meat had been sous-vide (French for under vacuum) which is a method of cooking food sealed in airtight plastic bags in a water bath for a long period of time. The intention is to cook the item evenly and to keep its juices. Following the chocolate theme chocolate oil was poured over the venison. Chanterelles are mushrooms, which has a fruity smell, reminiscent of apricots and a mild peppery taste. Chard is commonly known as silverbeet. The beetroot puree was a lovely component adding a textural difference with its softness.

When all of us thought it couldn’t get any better, dessert arrived. A beautiful Chocolate Soufflé with Chocolate Sauce. At first I thought it looked like it needed a bit of Ice cream or cream. To my surprise it was light and there was no need for a cold creamy liquid. I bragged to mum later about the Pedro Jimenez they were handing out to the adults to go with the soufflé.

Before I left Kym invited me to have a look at the kitchen and invited me back for some work experience.  Wish me luck!

Such a pleasure to write about nine of Brisbane’s most iconic dishes for @broadsheet.brisbane and speak to the chefs and restaurateurs behind them.
What an incredible two weeks doing vintage with @bellwetherwines in Coonawarra. Had so much fun and learnt lots. Thanks for having me Sue and thanks for the fantastic shots @stephenl.jones! 🍇
Have had a fantastic few days in Adelaide! Ate so much good food, drank some very good wine and enjoyed some very good company. Next stop: Coonawarra! 🍇
My three week trip may have been cut down to one (missing out on Chiang Mai and Laos), but it doesn’t compare to what so many other people are going through right now (especially in hospitality). For friends that I didn’t get to see, I will definitely be back once all this is over. For those I did see, thanks for making this week one I’ll never forget! #selfisolationtipsplease