So there I was, talking with David Thompson of Nahm fame, whilst standing next to the Pepe from Pepe Saya cultured butter and saying “Hi” to Miss Foodie, who was wandering by. Usually its times like that I can only dream of, but at the Noosa International Food & Wine Festival, it’s a place where dreams come true.

However, I’ll return to the very start of what began a fantastic long weekend of something I love… FOOD!!

It may be hard to believe but the 2013 Festival was even better than the 2012 one. Sit back, grab a cup of tea and find out what I got up to this year.

So without further ado, let’s begin!

Mum, Dad, The Princess (my little sis) and I left Brisbane hoping we could take in the scenery before I headed off to my first event. Instead we arrived in Noosa a lot later than planned. I leapt from our car in full chefs uniform and ran (running being something I would do a lot of over the next few days) to the Top Tastes of Queensland Lunch where I had organised to help Alastair McLeod, who now operates AlFreshCo. The chefs involved in the lunch were: Javier Codina from Moda (middle), Pablo Tordesillas from Ortiga (far right), Alejandro Cancino from Urbane (second from right), Matt Golinski (second from left), of course Al (far left) and Ryan Squires from Esquire who was away at the time. 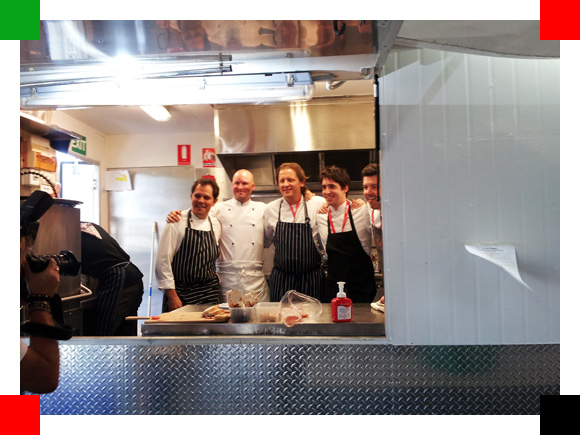 First I said hi to the chefs and began picking micro watercress for garnish on Al’s dish. While doing this, I met his partner who works for Channel 7 and she asked if they could have a little interview with me. Despite being very nervous, I’ m hoping I spoke well and didn’t majorly embarrass myself. I’ll put up the video when it gets produced.

Although I arrived after the second course I managed to take some photos of leftover dishes from the first two courses.

Course 1 was from Javier Codina of the Spanish restaurant Moda. He served a ceviche of Hervey Bay scallops, Lirah chardonnay vinegar, rose water and ‘Catalan Escalibada.’

I didn’t try it but I thought it was cleanly presented.

Course 2 was from Matt Golinski who served Zucchini, Goats cheese and olives. 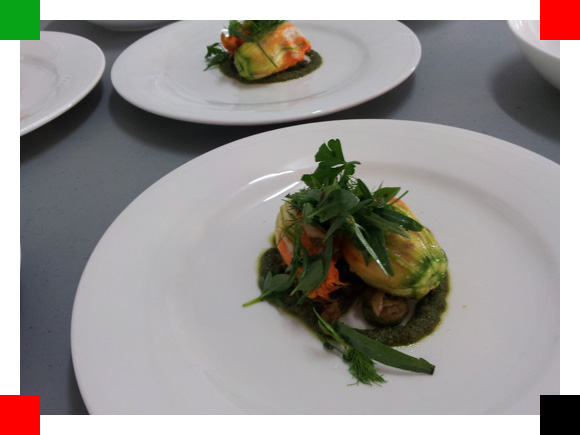 Again this dish looks very refined but unfortunately I missed out on a taste. 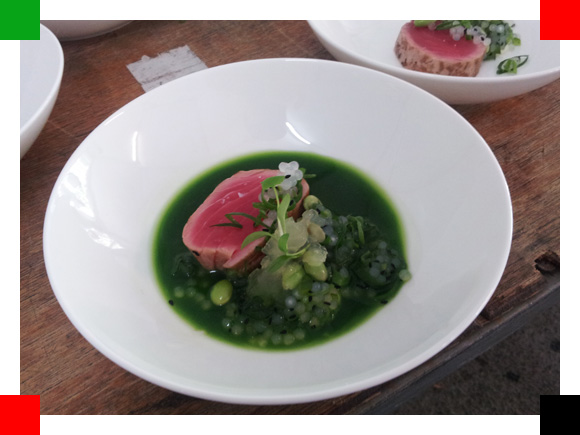 It was a very interesting dish as the parsley jus was mixed with dry ice and poured by the chefs at the table. I love the dark green colour that comes out in the dish and wished I had had a bite! Nevertheless, we received great feedback from the eaters.

I had previously worked with Alejandro and was chuffed he remembered me. He even let me take quite an important role in the service line, spooning the crumbs on the plate. I was between the two masters of Spanish cooking, Pablo and Javier, while the chef of the best restaurant in QLD, Ryan, helped from the other side of the table. Another one of those moments… The team went really well and the finished dish was a masterpiece. I finally had a try of the dish and it was very delish. The creaminess of the hollandaise was delectable with the crispy deboned wings and the soft and very flavoursome artichoke puree. The crumbs, adding an almost cornflakey crunch to the whole dish. Suberb!

In the lead up to the 5th course I was giving Ryan a hand getting all the plates and components of his dish together.

Course 5 was led by Pablo and for his “Cordello a la vanilla” dish, which means slow cooked lamb breast in vanilla with almond milk and spiced chick pea puree, I was the runner.

The diners that I talked to all agreed that Pablo’s dish was the standout. I luckily had a try and I found that the meat was falling apart and so sticky. Outstanding!

Ryan was in charge of dessert and he served his well known curds and whey ice cream dish with campari sherbet and orange. I had previously tried this dessert in my review of Esquire but this was served in a more mind blowing way. In order to keep the ice cream cold, he packaged it in special Esquire printed envelopes and buried it in an esky full of dry ice… genius! The envelopes were to be opened and poured onto the plate already containing the sherbet and orange jelly. A fun way of getting the diners involved. As you can see in my action shot perfectly modeled by Deniz (ex Bretts Wharf head chef and now head chef of the Pig & Whistle).

Here is a funny picture of the dry ice all emptied out in the gutter. It was funny until we found that he had placed it on a water pipe leading to a tap. We felt sorry for the person about to turn on the tap and find freezing water coming out. Whoops!

All in all, I had a fantastic day working with 6 of the best chefs in Qld, no, I am going to say Australia, and was able to chat about food and talk about when I can do work experience at their restaurants. Special thanks to Al for giving me the okay to come down and give a hand.

After the tiring day of work I was happy to sit down and enjoy dinner at Peter Kuruvita’s Noosa Beach House on its opening night! This review can be viewed HERE.

This day was amazing but the next two were just as good, if not better!

The day started early, arriving to the festival at around 9. I had organised to help my friend Lizzie Loel (Courier mail reviewer) cook in the Food Critics Cooking Competition. So far I had heard that we would be cooking some kind of crab fritter dish. I also knew that the theme was diner-style dude food. After looking around I finally found our stand. There was already someone there and after a good five or so minutes chatting I found out that it was a fellow food blogger called Maureen from The Orgasmic Chef. Afterwards another volunteer showed up and then Lizzie came.
We tracked down all our components including the chef (forgot his name) who helped us for the day.

Once all was set up and everyone knew what we were doing, it was time to start service. I was working the deep fryer cooking the fritters while the others were plating and taking orders. We worked really well as a team and were busy for the whole day. Here is the dish that we were serving:

After we finished, the team went down to the main stage where the winner was going to be announced. To win, you must receive the loudest cheer from the crowd that was measured by the announcer’s device. I hadn’t liked our chances of winning as we were up against critics such as Matt Preston (we all know Matt), John Lethlean & Necia Wilden (The Australian), Simon Thompson (ex Sydney Morning Herald), Elizabeth Meryment (The Sunday Telegraph) and other big names who could just win on popularity.

However, when it came to our cheer, we couldn’t believe the noise. It was incredible! We won comfortably and it was great seeing Lizzie lift up the trophy. Afterwards, I went up the back of the stadium to congratulate Lizzie and she introduced me to Matt Preston.

What a day! Tomorrow will be even harder and just as rewarding!

What an incredible two weeks doing vintage with @bellwetherwines in Coonawarra. Had so much fun and learnt lots. Thanks for having me Sue and thanks for the fantastic shots @stephenl.jones! 🍇
Have had a fantastic few days in Adelaide! Ate so much good food, drank some very good wine and enjoyed some very good company. Next stop: Coonawarra! 🍇
My three week trip may have been cut down to one (missing out on Chiang Mai and Laos), but it doesn’t compare to what so many other people are going through right now (especially in hospitality). For friends that I didn’t get to see, I will definitely be back once all this is over. For those I did see, thanks for making this week one I’ll never forget! #selfisolationtipsplease
Finally getting around to posting this epic Sunday lunch at Templo. Seriously tasty food backed by a killer wine list. Until next time @templohobart.