Cinco is a great modern Australian bistro with a really friendly kitchen team who gets along really well and has lots of fun. I gave the executive chef Peter Stubbs an email and told him how close I am to his restaurant (down the street) and asked him if I could do a service with his team… he said “Yes!” 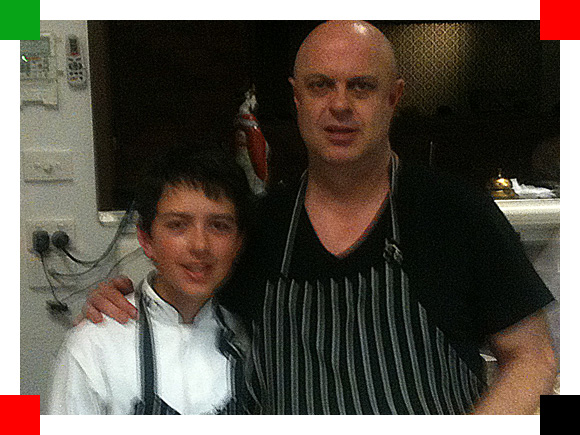 Peter Stubbs is the executive chef and owner of Cinco who has been a Private Chef for people like Vincent Fox (current prime minister of Mexico), David Bowie, Mick Jager and Mexican billionare Alberto Bailleres working on Private Yachts that he says was the best experience of his life and recommends it to any chef in the world.

A quick note that I am shortening my work experience due to the fact that I need to spend more time writing reviews and recipes. I will be dot pointing what I did.

• Arrived and broke down chickens into separate cuts with head chef Andy. Then cryvaced (vacuum sealed) each part.

• Prepare greek salad for pizzeria with Megan which had feta, tomato, cucumber, olives and red onion.

• For dinner service I started in the entree section with Ben when Peter came in. I plated up a couple of dishes and helped whenever necessary.

• Then went to Andy and Jake to watch mains go out.

• I salted the meat and took off any bits of rosemary, thyme or whatever herb was stuck to the cut of beef. They were running out of pre-seared beef so I was in charge of searing the beef before it is put in the oven to cook more.

• I cooked a couple of salmon pieces with Peter.

• Near the end of service I went to the dessert section and helped plate up some desserts.

• Learnt how to smoke tomatoes.

• Helped Megan make the Cinco Rocky Road. It is a layered dessert with marshmallow, hazelnut mousse, raspberry jelly and honeycomb with chocolate. I helped temper the chocolate (more on this in the <a href=”ReviewUrbane1″>(second chocolate appreciation night</a>).

• Plated mains with Andy and Jake.

• Refilled ingredients from fridge to chefs.

• Megan gave me taste test of all the ice creams in the dessert freezer. Included: ginger, vanilla (made by reusing the beans after cooking and blending to maximize flavour creating a more brownish ice cream), coconut, raspberry and a greek one.

• Worked on entrée and dessert section for service with Ben.

• Watched Ben make a not so traditional carbonara.

• Helped plate soup of the day, which was potato and leek with a dollop of crème fraiche and chives, cinnamon doughnuts, treacle pudding and bread platter.

• Helped a little in the pizza section with the chef Smarty.

I have had a fantastic time at Cinco so far and I hope to continue into the future and maybe get a part time job there. I highly recommend eating at Cinco so give it a try!

What an incredible two weeks doing vintage with @bellwetherwines in Coonawarra. Had so much fun and learnt lots. Thanks for having me Sue and thanks for the fantastic shots @stephenl.jones! 🍇
Have had a fantastic few days in Adelaide! Ate so much good food, drank some very good wine and enjoyed some very good company. Next stop: Coonawarra! 🍇
My three week trip may have been cut down to one (missing out on Chiang Mai and Laos), but it doesn’t compare to what so many other people are going through right now (especially in hospitality). For friends that I didn’t get to see, I will definitely be back once all this is over. For those I did see, thanks for making this week one I’ll never forget! #selfisolationtipsplease
Finally getting around to posting this epic Sunday lunch at Templo. Seriously tasty food backed by a killer wine list. Until next time @templohobart.