Not many would move away from the beautiful beaches, crystal waters and stunning surroundings of the Sunshine Coast, but my Nan did and I am really glad she did! She decided to move back up North to Atherton (one hour drive west of Cairns) where she had spent a few years living there after I turned two. 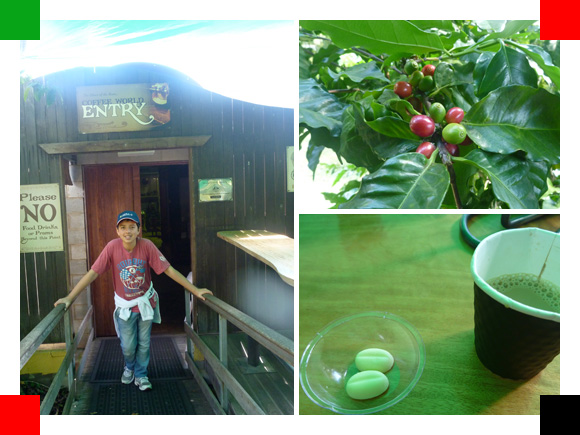 It was my fourth trip to Atherton. I had been there to visit her a couple of times. My third time was for a cricket carnival I was playing in two years ago.

This time I was going with Mum and the Princess (my Sister). On touchdown in Cairns my Aunty Louise (the healthy eater) met us. She took us on the ascent to Atherton through lovely green leafy bush and a long and winding road. Half an hour out from Atherton, the healthy eater dropped by Coffee Works at Mareeba where she encouraged Mum to buy her favourite blend Black Mountain. We returned there later in the trip for a tour, which I will provide more detail about.

We arrived at Nan’s and spent a day just to catch up with her in the house.

The healthy eater brought a bottle of chilli salt that we became addicted to. It’s made out of the Bhut Jolokia (formerly the hottest chili in the world – number 1 is the Trinidad Scorpian) and Pink Himalayan Rock Salt. In Queensland you can only buy it online from Western Australia at http://www.burningtastebuds.com Mum just ordered a few –due to our recent addiction.

A few days later we decided that we would go back for the tour of Coffee Works (CW). On our first visit Mum had also bought me a packet of their white chocolate, which was smooth and divine. The Princess had chosen chocolate mint, by the time we returned to CW it was all but gone. Mum had also picked up one of their brochures as well, which entitled us to a decent discount on the admission price for the tour.

Back to the chocolate, it’s made in house and you can see them making it behind the counter. On this occasion they were making chocolate in the shape of fish. We made the most of eating chocolate that day, there were so many different flavours, dark, white, milk, macadamias, mint, chilli, cappuccino, espresso, latte, coconut and even lime and black pepper and lemon myrtle which I wasn’t a fan of.
They also supply 21 different types of coffee where they roast all beans in house. This started my addiction for vanilla coffee. Also, they have the world’s largest collection of coffee and tea memorabilia with over 2000 items, some dating back to the 1700’s.

We started by tasting all the coffees, teas and chocolates. Below is a couple of coffee blends. I loved the vanilla coffee with white chocolate. Divine!

On the walls was information about coffee in the Far North and the conditions, blends, stages of preparation and much more.

Then once we were full, we entered the museum where there were remotes that we put to our ears to listen to information regarding a specific item.

Five theatres were scattered around the museum that focused on a specific country (USA, Turkey, Italy, Asia and Australia). There were also little corridors reminiscent of being in a strange place like Alice in Wonderland. Some of areas scared the Princess like the dark Einstein and Queen themed room.

While there, the Princess and I completed a scavenger like Quiz and located different items on a map – not an easy as it sounds, given the incredible collection of coffee related memorabilla. As a prize she was given some chocolates to take home.

Once back at the veranda – reserved only for those who were on the tour, Mum and I ordered the beef burger to share and the Princess and the healthy eater ordered chicken skewers with salad. They came out in no time and both meats were juicy and succulent. I didn’t really agree with the Smith’s crisps that were served on the side of the burger though.

What I loved about the tour was that it was UNLIMITED tasting for the whole day! We didn’t hit the coffee or the chocolate too hard when we first got there. Coffee for reasons well known! So instead we spent some time leisurely sitting, relaxing and enjoying the calm surrounds. For kids instead of the coffee, they do provide you with an iced chocolate. I actually got this plus for the first time Mum let me try coffee.

All in all it was well worth the $48 dollars (with discount, excluding lunch) for the four of us. We left with (if you can believe it) almost full bellies and a couple of coffee blends (including vanilla coffee!). Below is a collage of a couple of the CW photos.

The healthy eater then took us back to Atherton and to Shaylee Strawberries where you could see tents scattered around the fields (which we found out that there were strawberry pickers in them) and a team in a production line packaging the fresh and perfect strawberries. I couldn’t resist eating a small cupful of house-made strawberry ice-cream which was so creamy and delectable.

We also took home a 1 kilogram punnet of strawberries to eat at home I would have to say it was the most perfect strawberry we have ever eaten.

The next day was Dairy Tasting Day! We first ventured to Gallo Dairyland where there were lots of animals, cheese and chocolates. 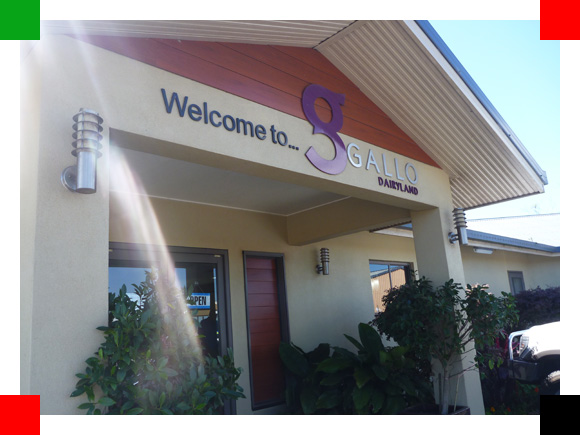 Off to the side of the main building is a viewing building where you can look down and see a worker making cheese. 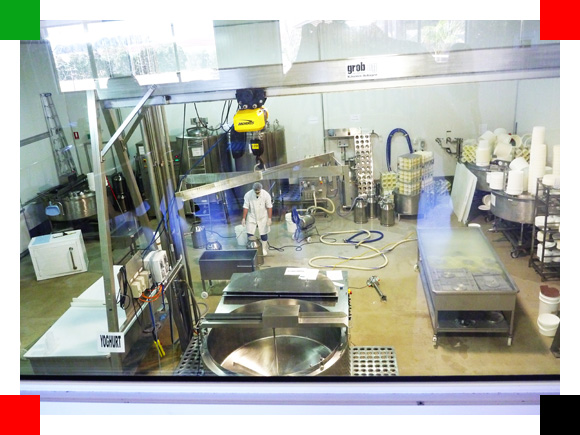 While there we watched a DVD in one of the rows of seats set aside for viewing. The movie showed the full process of making the cheese from cow to the finished product. The movie sucked us into ordering a tasting platter with heritage, tilsit, gruyere, camembert, gallozolla and crispy haloumi cheeses. Never in my life have I enjoyed eating cheese this much, because I knew how much work was involved in the process of making cheese.

Unfortunately we couldn’t stay to see the milking of the cows but we saw them come in from the pastures to the station. There were other animals like Goats, Chickens, Birds, Pigs and Sheep. All of which the Princess loved, she considers herself a bit of a farm girl at heart.

We then ventured much further a field where we found virtually in the middle of nowhere Mungalli Creek Dairy in Millaa Millaa. Their entire dairy is biodynamic which means that they work with nature and not against it.

As you enter, a large wall of awards stood at the back of the dairy. While Mum was deciding on what flavour yoghurt she should buy, I made a very difficult choice. I was deciding between two cheesecakes (my favourite cake). I opted for the Sicilian Cheesecake made with the dairies own ricotta cheese, dark chocolate and glace orange. The chocolate and orange flavour worked perfectly with the crunchy cinnamon base. And the vanilla ice cream on the side… awesome! We left with Mum’s blueberry and white chocolate yoghurt and (if you can believe it) enough room for lunch!

The healthy eater recommended going to Nick’s Swiss Italian Restaurant at Yungaba on the way home. So we decided that we would go for a light meal since we had already eaten so much! As you enter, you can see Swiss equipment in every direction. Cowbells, accordions, dolls and multicoloured hats (just to named a few) lay scattered around the room.

There was a bit of confusion, as we came in through the entrance of Nick’s but were seated in the pizzeria next door. There wasn’t a problem when we asked for Nick’s menu as well as the pizzeria one.

Mum and Nan decided to share a prawn pizza while the Princess some how convinced Mum to buy her a whole Frankfurt sausage meal. The healthy eater ordered chicken caesar with dressing on the side in case it was too oily (which it was). I ordered the ravioli “Napoli” which had a ricotta and spinach filling with Napolitana sauce and Parmesan cheese. 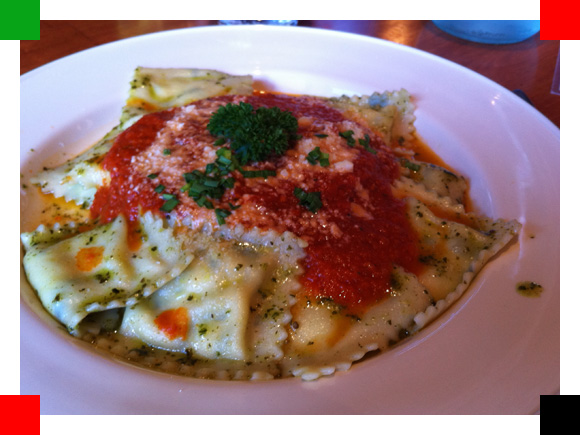 The prawn pizza was more like a plain pizza, as some pieces had no prawns on it at all.

The pasta was quite robust with a thick covering of sauce and ravioli cooked to my liking, which is just a bit past al dente.

As for the Princess’ meal… lets just say there was some waste.

As for me that was the end of my tasting adventure in Atherton, as I was then confined to the table to do my assignments and homework. However, on the way back to Cairns we ate at the award winning restaurant Nu Nu in Palm Cove. You will be able to read about that great lunch soon.